Are You Getting Paid What You’re Worth?

Did your salary increase last year? More than three quarters of information professionals who responded to a recent survey said they had received a pay increase over the prior year, and one in six reported an increase in the amount of time they were permitted to work from home. 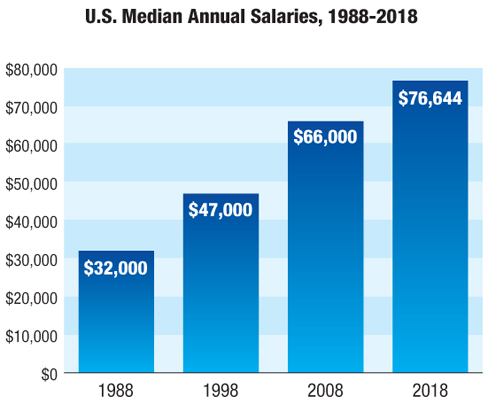 These are just two of the many findings presented in SLA’s 2018 Salary Survey Report. For more than 50 years, SLA has collected and disseminated salary data for special librarians and information professionals. The most recent report includes an updated look at compensation among professionals in the United States, Canada, and the United Kingdom, new data on the demographics of those in our profession, and detailed salary profiles of more than 30 areas of responsibility, ranging from acquisitions to competitive intelligence to digital preservation.

More than 1,500 individuals responded to the 2018 survey, either in part or in full. Respondents had spent an average of 9.7 years with their current employer, and 42 percent were in supervisory positions. Respondents reported having an average of 18.6 years’ experience working in the library and information science field.

Other key findings include the following:

Whether you’re a new professional entering the field, a seasoned practitioner looking to make a transition, or just want to ensure that your compensation is keeping pace with others in the field, the SLA Salary Survey is the authoritative resource to help you make your case. The report is available for $199 (SLA members pay a discounted price of $99) and can be purchased online at https://www.sla.org/shop/salary-survey/. The report is available exclusively in electronic (PDF) format.

Thanks to the members of the SLA Salary Survey Task Force for compiling the report:

One response to “Are You Getting Paid What You’re Worth?”