Although she just received her master’s degree in library and information science last month, Dymond Bush has been making a mark on librarianship since she began transitioning into the field from her previous work in kinesiology and sports management. She received the James Matarazzo Scholarship (named for a longtime professor at Simmons University, where she earned her library degree) from the SLA New England Community in 2020, was named a Kaleidoscope Program Diversity Scholar by the Association of Research Libraries the same year, and was honored as a 2020-2021 Spectrum Scholar by the American Library Association. 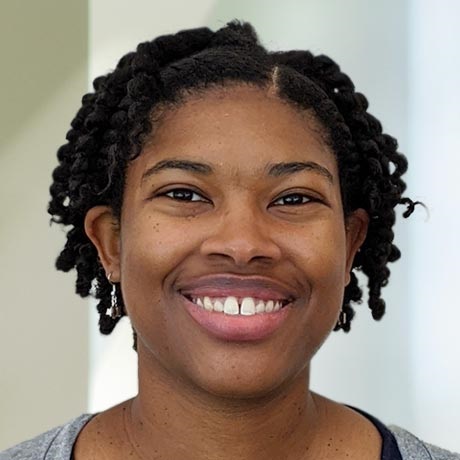 Now Dymond has added to her growing list of accomplishments by becoming the first recipient of a stipend from the SLA Diversity Inclusion Community Equity (DICE) Community to attend the National Joint Conference of Librarians of Color (JCLC) in October. The stipend will pay up to $2,000 to cover conference registration, travel, lodging, and other expenses.

“The opportunity to deepen connections with other librarians of color through conference attendance is something that I’m seeking as I transition into a career field where many do not look like me,” she said.

The committee that selected Dymond as the stipend recipient was impressed by her current involvement in SLA and her plans for future involvement. She intends to use multiple channels—her personal blog, SLA’s community forum (known as SLA Connect), and her presentations to DICE and other library communities—to share what she learns at the JCLC.

The JCLC stipend is the latest in a series of initiatives by the DICE Community since it was formed at the recommendation of a task force on diversity established by 2017 SLA President Dee Magnoni. Previously, SLA’s diversity efforts had been led by a committee that presented programs about diversity (e.g., a talk titled “The Black Male Librarian: An Endangered Species” at the SLA 2009 Annual Conference and a panel discussion on “Cultural Diversity and Working in a Global Information Environment” at the 2015 conference) and also sponsored an awards program that honored more than 60 information professionals over the course of its existence.

“The creation of the Diversity Inclusion Community Equity Caucus—now the DICE Community—and making it open for all SLA members to join at no additional cost was highly significant,” says Michael Sholinbeck, a DICE co-convener. “DICE has helped move some DEI issues to the forefront of SLA and has been a catalyst for all kinds of work, from making SLA conferences more family friendly to the recent Membership Advisory Committee DEI scholarships to the ongoing work on SLA’s Code of Conduct.”

“So much great individual activity has come from this work, from blog posts addressing elements of access to resources on indigenous land acknowledgements to the creation of webpages listing libguides and organizations related to LIS and social justice issues to the ongoing listing of diversity events from LIS organization and reviews of books, podcasts, movies, etc.,” echoes Clara Cabrera, another DICE co-convener. “The most meaningful accomplishment is the potential that I have seen for what so many in this community have tried to make happen, and in many instances have made happen.”

Interested in learning about other DICE and DEI initiatives for librarians and info pros? Check out the community’s calendar of events.