During World War II, 23 engineers from Lockheed (a U.S. aircraft manufacturer) were hand-picked by the U.S. Army to quickly design and build U.S. fighter aircraft. Their designs, which included the P-38 Lightning and the P-80 Shooting Star, were so successful that Lockheed decided to continue funding a separate innovation function after the war ended. That function is called Lockheed Advanced Development Programs, but the original effort is better known to historians and business leaders as “Skunk Works,” so named because of the fumes from a nearby factory that permeated the aircraft hangar where the engineers worked.

In the years since, some organizations have tried to replicate Lockheed’s success and created their own “skunk works” units to spur innovation. But as Adam Richardson pointed out in a Harvard Business Review article, such efforts rarely succeed over the long term.

“A small group operating autonomously can indeed succeed with audacious goals and produce something stunning,” he wrote. “But it’s one thing to have a one-off innovative product and quite another to have a ubiquitous innovation process.”

With SLA seeking new revenue streams to supplement the membership dues and conference registrations and exhibits that have long been its primary funding sources, taking a “Skunk Works” approach to generating a breakthrough idea or innovation might seem self-evident. But rather than limit the conversation about new revenue to a task force or committee (or themselves), the SLA Board of Directors decided to crowdsource the answer by issuing a challenge to the SLA membership and other interested parties. 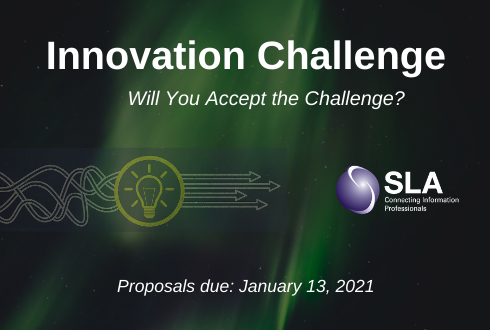 “We know that SLA needs new revenue streams, new ways to engage existing members around the world, and new ways to grow and diversify our membership,” SLA President Tara Murray Grove wrote in an e-mail to SLA members. “There have been a variety of task forces, conference and Leadership Summit sessions, town halls, board meetings, and more related to these challenges. Now, together with the SLA Board, I am calling on you to participate in this future-thinking process.”

The result is the SLA Innovation Challenge, which is designed to encourage SLA members to submit, either individually or in teams, innovations or ideas that could generate revenue and growth for SLA. Teams can be composed of members, non-members, industry partners, and other interested parties and can include as many individuals as needed or want to collaborate on the development of an idea.

SLA is looking for as many ideas as possible, and therefore will not limit the number of ideas an individual or team submits. The board of directors will take these ideas to build an action plan to move the association forward. The deadline for the initial round of innovative ideas is January 19.

One response to “Crowdsourcing the ‘Future-Thinking’ Process”