Angela R. “Ange” Pollis, a 1999 inductee into SLA’s Hall of Fame and an active member and leader of the SLA Pittsburgh Chapter well into her retirement years, died on November 1.

A librarian at U.S. Steel for much of her professional career, Ange served as manager of the Knowledge Resource Center at the company’s Steel Research and Technology Center. She was a leader in the automation of documentation and received an Individual Achievement Award from U.S. Steel for her work on computerized searching and knowledge management.

At U.S. Steel, Ange also indulged her passion for patents. She is a named inventor on U.S. Patent 3,265,600, “Method of Coating Silicon Steel in Conjunction with Box Annealing thereof Preparatory to Die Punching,” granted in August 1966. 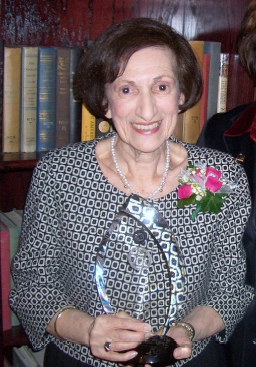 Outside U.S. Steel, Ange made her presence felt in academia and in professional associations. She taught at Carnegie-Mellon University, where she had earned a bachelor’s degree in chemistry; later, she taught at the University of Pittsburgh School of Information Science (now the School of Computing & Information), from which she had earned her library degree in 1969. She was active not just in SLA but also in the American Chemical Society and the American Iron and Steel Institute.

In 1999, Ange was inducted into the SLA Hall of Fame, SLA’s oldest honor. Membership in the Hall of Fame is accorded to SLA members in good standing who are at or near the end of their active professional career to recognize service and contributions to the association. Hall of Fame recognition also is granted for lengthy distinguished service to an SLA chapter or division that has contributed to the success of the association.

After her induction into the Hall of Fame, Ange continued giving back to SLA and the information profession. She received the SLA Pittsburgh Chapter’s Lifetime Achievement Award in 2008 in recognition of her many contributions to the chapter, including chairing the Awards, Consultations, Networking, and Public Relations Committees. In 2014, she received the “2014 Longevity Award” from SLA’s Science-Technology Division to honor her 40 years of active Sci-Tech membership, which included teaching several courses for the division.

In 2010, she received the Distinguished Alumni Award from the University of Pittsburgh School of Computing & Information. While an adjunct professor at the school, she was the placement advisor for many students coming through, helping them with field placement and internship positions.

“She was a mentor to so many of us in Pittsburgh, and we consider her a true legend and innovative pioneer,” said Denise Callihan, 2000-2001 president of the Pittsburgh Chapter. “She was the right person to know if you needed to gather people and perspective on a topic. She also taught us all the value and love of family and friendships. She will be deeply missed.”

4 responses to “In Memoriam: Angela Pollis”

Leave a Reply to 8254 Cancel reply