Make the Most of Your Summer with SLA

Visiting interesting places. Getting together with friends. Recharging your mind.

If these activities sound like your idea of a perfect summer, you’ll feel right at home in SLA.

The highlight of the summer (winter to those of you in the Southern Hemisphere) was the SLA 2018 Annual Conference, which attracted more than 1,800 information professionals to Baltimore for three-plus days of learning, connecting, sharing, and sightseeing. Attendees heard from keynote speakers such as Librarian of Congress Carla Hayden, attended sessions on topics such as 3-D printing, web archiving, and data visualization, met with industry partners in the exhibit hall, and toured local sites such as the National Aquarium, Fort McHenry National Monument, and the Edgar Allan Poe House. 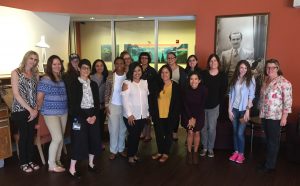 But even before the conference began, SLA members were making the most of their summer. On June 8, members of the SLA student group at San Jose State University (photo at left) toured the Disney Animation Research Library, home to 60-million-plus pieces of original animation artwork from Walt Disney Studios. The library is not open to the public and its address is not published—visitors are even required to turn off the GPS locators on their smartphones to prevent coordinates from being tracked—adding an element of intrigue to an already exclusive event.

Since the annual conference ended on June 13, several SLA chapters (geographic units, such as the Southern California Chapter) and divisions (discipline-specific groups, such as the Engineering Division or the Legal Division) have followed the SJSU student group’s lead by conducting webinars, planning special events, and otherwise keeping members informed and engaged.

Next week, on August 16, the Illinois Chapter will host a symposium and dinner with 2018 SLA President Roberto Sarmiento. Presentations will address topics such as alternative careers for those with library skills, using the lightboard for inclusive teaching, and the evolution of special libraries. The following week, on August 20-21, the Maryland Chapter and the National Institutes of Health Library will co-host a two-day symposium on bibliometrics and research assessment. Finally, on August 22, SLA’s Competitive Intelligence Division will host a webinar titled “How to Go Beyond Google: Discovering CI/MI Research Tools” featuring Arthur Weiss, who offered the world’s first workshop on using the Internet for competitive intelligence at the 1997 International Online Information Conference.

And just before summer officially ends, the SLA Route 66 Chapter will conduct a “Road Trip Symposium” at the Greer Peaks Lodge in Arizona to showcase information professionals who are successful at demonstrating their value. In addition to presentations on measuring and increasing the value of library services, rethinking what discovery means, and implementing outreach efforts beyond library spaces, the symposium will include a networking activity and a wildlife walk.

Want to get more out of your summer? SLA offers these and plenty of other opportunities to make connections, see new sites, and expand your mind (and skill set). Join now and start taking advantage of all that SLA has to offer!

©2021 Special Libraries Association. All Rights Reserved
Do NOT follow this link or you will be banned from the site!
X