Not All Emergencies are Created Equal

Think you’re prepared for an emergency—an earthquake or tornado, say, or a “live shooter” situation? 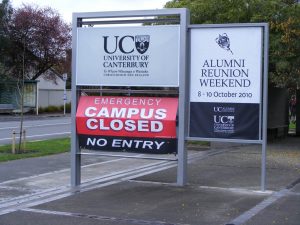 Librarians at the University of Canterbury in Christchurch, New Zealand, probably thought they were prepared on the morning of 22 February 2011. After all, they had endured an earthquake just five months earlier that had forced the closure of the school’s Central Library for 10 days. Shelves had toppled, books had fallen, ceilings had collapsed, cabinets had emptied their belongings—but aside from some mess and inconvenience, the library had weathered the incident remarkably well.

“I have to say, we were very naive at that time,” says Sara Roberts, the law liaison librarian at the university. “We thought it was a tragedy, but nothing we couldn’t handle.”

Roberts and her co-workers found out just how naive they were on February 22, when the ground under Christchurch shifted again. Streets turned to liquid asphalt, swallowing cars. Several buildings that had suffered minor damage in the September 2010 earthquake began to crumble, including the six-story headquarters of Canterbury Television, which collapsed and caught fire, killing more than 100 people.

“Not all earthquakes are created equal,” says Sara, whose half-hour commute home took five hours that day. “We had a library disaster preparedness plan and a library business continuity plan, but they were in no way adequate for a disaster of this scale. The kind of emergency we were thinking of was the sprinkler system going off by mistake.”

On October 6, Sara shared her experiences and the lessons she and her fellow librarians learned in a one-hour Webinar hosted by SLA’s Emergency Preparedness and Recovery Advisory Council (EPRAC). Joining Sara as webinar presenters were Kevin Adams, an information specialist at the Institute of Environmental Science and Research in Christchurch, and Doris Helfer, chair of collection access and management services at California State University in Northridge. All three had lessons and insights to share—Kevin noted that the earthquakes hastened his library’s move toward electronic journals, and Doris explained that the safest response to a live shooter scenario is to “get out, hide out, or help out” as the situation dictates.

The webinar, “Disaster Planning for Librarians,” is available to all SLA members in the EPRAC library on SLA Connect. Not a member? Join SLA now!