The opening general session of the SLA 2018 Annual Conference was part homecoming, part awards ceremony, and part keynote presentation, but the unifying thread running throughout the event was leadership—both practicing it and exhibiting it.

SLA President Roberto Sarmiento encouraged the 800-plus session attendees to use their time in Baltimore practicing leadership, saying the conference was a “safe environment” for taking risks they wouldn’t normally take.

“Over the next three days, I want each of you to practice leadership,” he said. “Practice it by striking up conversations with people you’ve never met. Practice it by asking questions in education sessions. Practice it by attending business meetings of your chapter or division. Practice it by doing things you don’t normally do, by stepping outside your comfort zone.” 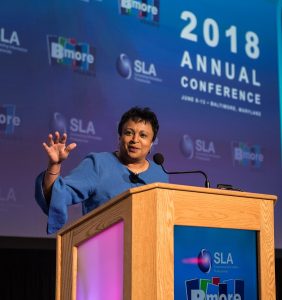 The keynote speaker, Librarian of Congress Carla Hayden, challenged the attendees to put their leadership skills to work, saying that skepticism about the veracity of information is rising and that librarians can and should put such doubts to rest.

“What is happening is that the appetite for the real thing—how do we know that this is authoritative, how do we know this is the actual factual information—has been growing,” she said. “And this is a unique time for us, as information professionals, to claim that space.”

The awards ceremony provided additional perspectives on leadership, as five up-and-coming library professionals and a respected industry veteran were honored.

Anya Bartelmann, Willow Fuchs, Eric Tans, Heidi Tebbe, and Caren Torrey were named Rising Stars for demonstrating leadership and the ability to creatively solve problems in the early stages of their career. Karen Reczek received the John Cotton Dana Award, SLA’s highest honor, for her exceptional service to SLA and the information profession.

In her remarks, Karen noted that her commitment to SLA and the library field stemmed from her passion for the profession and said she hoped others felt passionate about it as well. She also paid homage to two previous Dana Award recipients, James Matarazzo and Toby Pearlstein, who wrote extensively about special libraries and their roles in changing environments.

“As our colleagues Toby Pearlstein and the late James Matarazzo said, and I quote, ‘Librarians are capable of doing a lot of things. It is really not a question of what can you do; rather, the question is, what should you do?'”

Roberto concluded the session by reiterating his call to use the conference as a venue not just for learning and networking, but for practicing leadership.

“This is your home,” he said. “This is where you can do the equivalent of singing in the shower and painting your bedroom bright orange and eating ice cream for breakfast, and no one will say anything. . . You have three days—make the most of them!”