As part of the 2013 SLA Awards & Honors program (which culminated on-stage on June 9th in San Diego), we detail a few of the many accomplishments and contributions of our 2013 SLA Award Recipients. Find descriptions of each SLA Award. 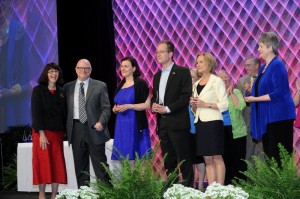 “Each new Fellow fits right in with a class of esteemed individuals who have led SLA and our profession forward, said SLA President Deb Hunt. “I’m eager to see what this new class will accomplish together. Their actions have already inspired many of us at SLA, myself included, to achieve more and aim higher.”

More about the 2013 SLA Fellows

David Cappoli is the Web Services Librarian for the UCLA School of Law, where he oversees web content for the school and is currently leading the school-wide website redesign.  Before his current position, David was the Digital Resources Librarian for the UCLA Department of Information Studies (IS).  In this position, David oversaw instructional technology needs for departmental courses and administered the department’s continuing education workshops.

Prior to joining UCLA, David was a Librarian in the Los Angeles Times’ Image Archive and worked at Glasgow Polytechnic in Scotland, overseeing the database of research activities.

David has been active in SLA for many years in many roles, including, Treasurer and President of the Southern California Chapter; a member of the Centennial Commission which oversaw the Association’s Centennial Proceedings in 2009, the 2009 Conference Planning Council, and the New Visions Task Force where he led the group reviewing SLA’s relationship to library and information studies programs and other instructional issues, such as continuing education.  He has served on the Public Relations Advisory Council supporting the Association’s employer outreach efforts through podcasting, and is the Academic Division’s program planner for SLA’s 2013 annual conference.

David is also the Advisor to the SLA Student Chapter at UCLA.

Dennie Heye is Information Management business analyst for a Fortune 500 Energy Company. He is responsible for supporting the new business development group of his company’s international team by providing information, records, and knowledge management solutions.

He graduated from the Dutch Hogeschool Zuyd with a degree in Library & Information Science in 1993 and masters of arts degree in marketing from Tilburg University in 1996.

In 2006 he published his book “Characteristics of the Successful 21st Century Information Professional“, which is a guide for professional Library and Information Services staff and students ready to enhance their value as professionals.

He has also published two volumes of his satirical library blog “obnoxious librarian from hades.”

Dennie is a founding member and a coordinator of the Dutch Knowledge Management Round table, a network of senior knowledge managers in the Netherlands.

He has held different roles in the SLA Europe chapter and the Division of Petroleum & Energy Resources as well. He pioneered the SLA Europe podcast to bring trends, interviews and conference reports to SLA members around the world. He also currently serves on the Association’s Online Content Advisory Council, supporting SLA staff in social media strategy, programming, and content beneficial to its global membership.

Martha has exhibited leadership throughout her 25 years as an information professional and has been an active SLA volunteer, mentor, and member since becoming involved in 2000. Among other Chapter and Division contributions, she Chaired the international relations committee from 2001 to 2004 for the SLA Legal Division, served as President of the Toronto Chapter in 2006, and is set to Chair of the associations Leadership & Management Division next year.

At the international level, Martha has served on the Information Outlook Advisory Council, which guides association staff and magazine contributors in their production of the magazine of the information industry. She also served as Contributed Papers Chair for the Philadelphia Conference in 2011, overseeing submission and presentation of dozens of research papers on the industry’s hottest topics, a contribution which earned her a Presidential Citation.

Mary Talley is a non-traditional librarian who combines a passion for her profession with a love of entrepreneurship to create a unique career path. In the mid-1980’s, she left a position as law library director in Los Angeles to found a library consulting and staffing business. In 1994, Mary moved to Washington, D.C., sold her business, and continued her role as an information management consultant. Today, Mary collaborates with libraries and information centers of all types and sizes to support their strategic planning efforts. As the head of TalleyPartners, she focuses on repositioning information centers to raise value and visibility and meet the needs of changing business environments.

Throughout Mary’s moves and transitions, SLA has been her constant, keeping her connected and moving forward as a librarian and an entrepreneur. Like the Fellows who precede her, she has served locally, holding positions from Chair of the Leadership and Management Division’s Consulting Section in 1996 to President of the DC-SLA Chapter in 2011, as well as internationally, as a member of the 1996 Annual Conference Program Planning Committee, Alignment Ambassador from 2009-2011, and a current member of DC-SLA’s Loyalty Project Team.

In 2008, Mary was a co-recipient of the 2008 SLA research grant to study embedded librarianship and the 2011 recipient of SLA’s Rose Vormelker Award for Mentoring. Recently, she has driven the DC chapter-initiative to offer high-quality networking events, such as Speed Mentoring.

Rebecca Vargha directs the Information and Library Science Library at the University of North Carolina, Chapel Hill. Her responsibilities as library manager at the School of Information and Library Science include collection development, teaching, staff supervision, liaising with departmental faculty and the central library, reference and research assistance, and facilities management.

An SLA member since 1980, she has served on or chaired over 6 association-level committee groups, was elected to the SLA Board in 2005, and served as its President from 2006 through 2007. As President, she bolstered SLA’s international presence by actively representing SLA in the International Federation of Libraries Associations, and at conferences such as Online in the United Kingdom.

Rebecca has been widely honored for her leadership and contribution. She was named a Distinguished Alumna from the University of North Carolina Central University, where she earned her MLIS degree, and her SLA Chapter received the Outstanding Chapter Technology Award from SLA’s IT Division for her team’s presentation on Web 2.0 tools and podcasting in 2009.

Vargha holds a bachelor’s degree in English from UNC-Chapel Hill and a master’s degree in library science from North Carolina Central University. She is a member of Beta Phi Mu and in May 2012, she received UNC’s Deborah Barreau Award for Teaching Excellence, which recognizes faculty members for outstanding teaching.  Rebecca continues to be an important colleague, peer, and resource to MLIS students and current professionals alike.