As part of the 2013 SLA Awards & Honors program (which culminated on-stage on June 9th in San Diego), we detail a few of the many accomplishments and contributions of our 2013 SLA Award Recipients. Find descriptions of each SLA Award.

Dee Magnoni and Pam Rollo were named as co-recipients of the 2013 Rose L. Vormelker Award. The “Rosie” is presented to mid-career members who actively teach and/or mentor students or practicing information professionals.

“The Rose L. Vormelker Award honors excellence in teaching and mentoring,” said 2013 President Deb Hunt. “Past recipients have been instructors, personal mentors, and without a doubt, leaders of their SLA tribe. Like last year, the SLA Awards committee received such a strong class of nominations that we are pleased to recognize these two individuals.” 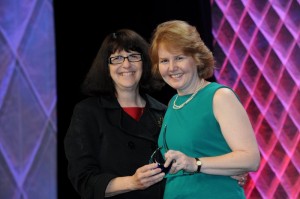 Dee Magnoni is the Library Director at Franklin W. Olin College of Engineering in Needham, Massachusetts. She was hired as the library’s first director in 2002 and set up much of the services and resources from scratch, including a realia collection that engages several of the students’ intelligences. Dee’s creation of internal and external partnerships has led to deeper integration of the library into the curriculum and stronger services and resources available to the university community. Dee previously worked in both business and engineering libraries within corporate America and academia. She received her MLS from SUNY-Albany (1992) and her BA from Lehigh University (1986).

Dee is an active member of the Special Libraries Association. She is a Fellow, and has served in several leadership roles, including chair of the Leadership & Management, Engineering, and Information Technology Divisions and President of the New England and Rhode Island Chapters. She is Chair of the 2014 Annual Conference Advisory Committee for next year’s conference in Vancouver, and has chaired the Professional Development Advisory Committee. Dee has twice served as a Director on the Board of Directors.

Dee is an annual speaker in a Simmons College’s STEM reference class, and has designed and executed mentoring programs within SLA. 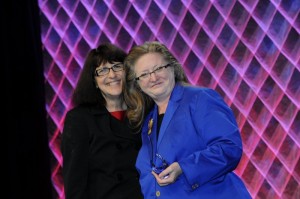 Pam Rollo is director in Standard & Poors ratings unit where she is developing a mission-critical knowledge management system.  She embodies the many strengths represented by the Rose. L. Vormelker award. She displays passion while teaching and mentoring students, as well as experienced information professionals.

She has been actively involved in SLA since 1986, and has volunteered on all levels including serving as association president in 2006, and as a member of its Board of Directors from 2002 to 2007.

She organized the New York Chapter’s Days of Learning, for which she recruited distinguished university professors as keynote speakers. The day-long seminars were designed to encourage information professionals to think outside the box and add new responsibilities and tools to their repertoire. More recently, she has created a Leadership Lecture Series which is focused on engaging members to think about the next steps in their career development. During the recent economic downturn, Pamela organized meetings to mentor members in transition and those who wanted to move their careers in a new direction. Pam has taught at a number of the area library schools and is currently a Visiting Professor at Pratt Institute’s School of Information and Library Science where she teaches Business/Economic and Statistical Sources and Online Databases; both core classes in the school’s business and corporate information studies curriculum. In addition to teaching, Pamela encourages her students to become active members of the association and facilitates networking with experienced information professionals. The current President of the New York Chapter is a mentee and former student of Pam’s.