Karen Reczek has been a member of SLA for almost 30 years and has been actively involved in the association in nearly all of them. On Monday, June 11, at the opening session of the SLA 2018 Annual Conference in Baltimore, SLA will honor Karen’s service by presenting her with the John Cotton Dana Award, the association’s most prestigious prize.

The Dana Award, named for SLA’s founder and first president, is bestowed upon members who have given exceptional service to SLA and the library and information profession. Karen has done both—and continues to do so to this day. 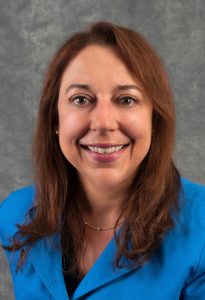 Within SLA, Karen has served on the association’s Board of Directors, chaired two task forces and two advisory councils (including the 2006 Annual Conference Advisory Council), and served on seven other committees and task forces. She has chaired the Pharmaceutical and Health Technology Division and the Leadership and Management Division and was a founding member and first chair of both the Competitive Intelligence Division and the Knowledge Management Division. She has also served in numerous roles in the SLA Upstate New York Chapter, including president and Membership Committee chair.

Karen has also given freely of her time and talents to nurture aspiring librarians. She served as faculty advisor to the SLA Student Group at the University at Buffalo in New York and provided interviews, internships, and temporary jobs to dozens of library students while working at Bristol-Myers Squibb and Bureau Veritas Consumer Products Services.

Karen has also contributed to the body of knowledge within the information profession, authoring and co-authoring dozens of articles and reports and writing a book about establishing an information center. She is a frequent presenter at SLA annual conferences and will be speaking twice at the conference in Baltimore.

In recognition of her many contributions to SLA and the information profession, Karen was named an SLA Fellow in 2004. Nearly 20 of her peers wrote letters endorsing her for the Dana Award; one of those letters summed up her qualifications in these words: “Karen epitomizes the very best of SLA—a consummate information professional, and outstanding leader, and an inspiring mentor.”